Conceive Plus is a fertility friendly lubricant that has been designed for couples trying to conceive. It has been clinically proven to be nontoxic to sperm and can be safely used by couples trying to conceive. The lubricant has been designed to mimic fertile cervical mucus and to enhance lovemaking without harming or impeding the movement of sperm through the female reproductive system.

Conceive Plus is manufactured by Sasmar.

Buy Conceive Plus in the UK from Access Diagnostics

Other fertility friendly intimate lubricants include Pre-Seed fertility lubricant are also available to help you conceive.

Recently the BBC had an exciting news article that we may soon have an effective male contraceptive pill. Scientists in USA have been testing a drug ‘JQ1’ on mice. These tests have shown that whilst consuming the drug, the mice were rendered temporarily infertile, due to low sperm count and low motility levels. But of course, there are a lot of tests still to be done including on humans before you see this pill behind the Pharmacy counter.

But even before this prospective pill could be found and tested, scientists had to go deeper into the genome to find the ‘contraceptive gene.’ Known as ‘Katnal1’ this gene responsible for sperm production was found in mice. It is then this drug ‘JQ1’ which will interrupt Katnal1 to make a reversible contraceptive. This drug stops protein production meaning the male gametes do not fully form and the body disposes of them. Meaning, no fertilisation. (Or reduced chance, as one should say.)
It is reversible in the sense that it does not stop the early stages of sperm production and the organisms ability to produce them. It just stops them from fully forming in the later stages, whilst taking the drug.

But, another study has found that ultrasound to the testicles can stop sperm production. First proposed in the 1970’s it is only now being pursued. It has been found that two 15 minute doses, two days apart and through warm salt water “significantly reduced” the number of sperm. After being tested on rats, their sperm count dropped to ‘below 10 million per millilitre’.

But how good is this? Yes there will be fewer unplanned pregnancy but will this increase the rates of under-age sex? And will this lead to reduced use of the condom? Which the global world has taken years to raise awareness of. But then also, will there be any need for condoms?

Our fertility website Access Diagnostics Fertility has 300 packs of Conceive Plus trial size to give away to the first 300 lucky customers who request a free pack when they place their order online.

To receive the free sample of conceive plus worth £8.99, this must be requested at the time of ordering. This is a limited offer while stocks of the 300 giveaway Conceive Plus trial size last so be quick. 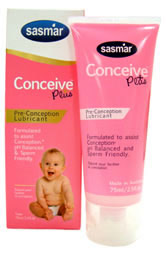